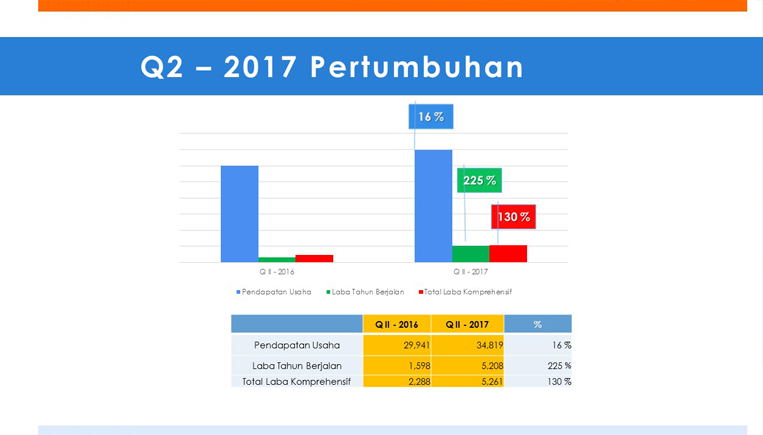 Jakarta,- PT Humpuss Intermoda Transportasi Tbk. increasingly firms their position as one of the best in the oil and gas transportation industry with their brilliant work during the first semester of the year.

After  building a good financial foundation for the last years, the public company with the stock code 'HITS' has continued the trend of continual positive development.

Thereby, the gross profit increased to 66% or US$14,5 million within the first 6 months of this year compared to the achievements of the same period in the year prior's gross profit of US$8,7 million. Meanwhile, the profit of the current year so far has reached US$5,2million, three times higher than the US$1,5 million of the same semester last year.

Moreover, in the same period, the company's comprehensive yearly profit is also going strong from US$2,2 million to US$5,2 million, while the ongoing yearly profit distributed to the parent entity of the company reached US$2,9 million, or has skyrocketed y 163% from US$1,1million.

HITS also has a healthy financial condition. The company's cash has reached US$27 million by 30 June 2017; it has increased from last year's position from US$23,1 million. Compared on a year-by-year basis, the company's cash has multiplied almost two times from the same period of last year of US$13,9 million.

Theo Lekatompessy, President of PT Humpuss Intermoda Transportasi Tbk., stated that in the midst of a major challenge occurring within the oil and gas sector in Indonesia, the company has managed to prove itself as one of the best transportation companies which has an ongoing performance of sustained growth.

"We started the process of restructuralization on 2012 with the OBH formula, namely organization, business and Hukum (Law). After the process was finished, the company's foundation is built strongly and is prepared with the correct and prudent business strategy. We succeeded in fulfilling the promise to the shareholders as well as stakeholders to produce a positive and ongoing performance of growth." mentioned Theo.

The concern over giving additional value to the shareholders is also seen by HITS' decision to distribute 50% of its profit from 2016 as large as US$2,62 million as dividend. This is the first time in 10 years it has happened.

"The decision we took to satisfy our commitment of dividing profit to the shareholders who has given their great trust in our management to administer  HITS so that it can continually grow in the future," Theo explained.

Theo added, "HITS will continually seek for the right changes and in accordance too its core-business, namely the transportation of oil, gas, petrochemicals, as well as shipping management services, to maintain the ongoing growth we currently have."

Business expansions are continuously made. In the end of July 2017, HITS has added one oil tanker MT Prospero changed to be Griya Jawa from Donso Shipping AB and Donso Holding AB by PT Hutama Trans Kencana, a company under the control of the company. (*)